Prisoners inside Santa Rita Jail in Dublin, CA are staging a one day hunger strike and work stoppage to protest widespread institutional neglect and abuse, including unsanitary living conditions, price gouging, poor medical care, forced labor, and lack of access to legal resources. The self-organized protest began as a sit-in within a single housing unit, but organizers have called for a jailwide action on Wednesday, October 30th in response to poor jail conditions and indefinite lockdowns.

Conditions inside Santa Rita are at a “crisis point,” according to a statement released by strike organizers today. “Detainees are only provided cleaning supplies once a week…[and] are contracting lice, bed bugs, and flesh-eating staph infections from the MRSA virus,” organizers write, adding that jail staff routinely neglects medical and mental health emergencies. Many prisoners have self-harmed and are left with untreated wounds; individuals suffering from addiction withdrawal are not sent to the infirmary, and instead endure painful and dangerous symptoms in their dorms.

Attorney Yolanda Huang confirmed that “Santa Rita is one of the worst jails in the Bay Area. They are extremely disorganized and the facility is dirty despite the fact that they received $430 million a year.” Nine people have died in custody in 2019. Because inmate deaths that occur in local hospitals are not recorded as in-custody deaths, the actual number of deaths due to the jail is much higher. There are multiple active lawsuits against the facility and its personnel for wrongful deaths, abuse of pregnant women, guard-orchestrated assaults, and other forms of systematic abuse and neglect.

The Kincade Fire has recently exacerbated short-staffing conditions and lockdowns at Santa Rita. Huang explained that because Sheriff Ahern leads emergency responses for Alameda County, Santa Rita staff have also been redirected to the Kincade Fire, which began on October 23 in Sonoma County. As a result, prisoners are simply locked down in their cells with little access to scheduled visits, telephones, or medical care. Huang adds that two prisoners were hospitalized this past weekend.

In addition to facing inhumane conditions inside, strike participants are being threatened and intimidated by Santa Rita guards. One organizer has been transferred out to a more distant jail already, and others were threatened with 30 additional days of jail time. Advocates are calling on the community to contact the Sheriff’s Office and the Alameda County Board of Supervisors to ask that detainees not be punished for engaging in peaceful protest.

Demands of the strike include:
● Better and more nutritious food, that is not spoiled nor served in
unsanitary ways
● An end to price-gouging for commissary, phone calls, and video
visitation
● More changes of clothing and laundry access
● Cleaning supplies
● Access to lawyers and legal library
● Daily exercise and recreation time

Cell sanitation is at a crisis point. Detainees are only provided cleaning supplies once a week. The supplies provided are insufficient as is the time allotted to effectively clean their cells, sinks, showers, toilets, and floors. Blood-sucking gnats swarm the showers and cells. Detainees are contracting lice, bed bugs, and flesh-eating staph infections from the MRSA virus.

The protocols for sanitation are illogical. Detainees are only given one set of clothes for the week, to include one shower towel. This policy is in stark contrast to most other jails that provide four (4) sets or more of clothes per week.

New clothes are exchanged every Friday. Cell cleaning is scheduled every Saturday. Forcing citizen detainees to clean their cells, floors bathrooms, and showers in clean clothes and then sit in their new dirty clothes for the remaining six (6) days of the week. This is indignant and punitive treatment.

Homeless detainees are exchanged out of their filthy clothes and into clean jail-issued clothes without being showered or sanitized. They are then sent to filthy holding cells to sit and lay down in vomit, urine, feces, semen, food, and dirt-stained floors until they are transported to their new housing unit. They are then introduced to a dormitory cell shared by as many as 30 other detainees, comprised of regular citizens serving terms for drunk driving, drug possession, domestic violence, or awaiting their court dates, etc. Upon arrival to the dorm unit, known as a ‘pod,’ they are mandated to shower in the singular shower stall shared by all dorm mates. This spreads lice, bed bugs, and infectious diseases like MRSA; creating an obvious health hazard and public safety problem.

In the worst case detainees are exposed to heroin addicts introduced to the dorm without any medication. The heroin addicts involuntarily defecate on themselves, the floors, toilets, and showers creating an enormous biohazard. Rather than caring for the heroin addict in the infirmary, the detainees are made to tend to the addict, clean up the addict and his messes, and suffer the indignity, smell, and infectious disease risks associated with these intravenous drug users. The risk of exposure to Hepatitis, C-Difficil, Psuedomonis, E. Coli, and other infectious diseases is an illogical risk to the detainees and public health in general.

The jail is suffering continuous lockdowns due to insufficient resources, manpower, and apparent funding. Consequently, citizen detainees are being ‘locked down’ in their cells in excess of 22 hours a day. Family and attorney visits are being canceled due to lack of manpower to walk detainees to their visits. In many cases, families and attorneys who are traveling in excess of two (2) hours and/or flying in are being denied their visits upon arriving at the jail. They are given no notice and are having to return home. This is creating frustrations and costs that are unnecessary.

Detainees are being gouged by excessive calling costs. The cost to place a call is twenty-three cents ($0.23) per minute with a 15-minute limit, and phones are limited. This is costly and punitive to detainees, their families, and lawyers. All calls are also recorded and monitored, precluding detainees from mounting their defense with counsel or speaking candidly or intimately to their loved ones.

For federal detainees the jail is required to have a law library. It does not! This precludes federal detainees from being able to mount their defense, creating a liability for the government, in that it gives those convicted an immediate appeal.

Detainees are being deprived of access to personal electronics commonly available at other jails. They are suffering the ability to remain connected and engaged to their families, jobs, and the world in general. For an otherwise innocent detainee this exacerbates their personal and professional hardship, costing many their relationships, jobs, and income; and precludes them from accessing the legal resources and intelligence to defend themselves. Detainees are requesting reinstatement of their ability to call, text, email, and use the internet to carry on their lives.

For more information on the hunger strike and/or if you suffered under the conditions of Santa Rita and wish to bear witness please call the law offices of Yolanda Huang, 510-329-2140.

We the prisoners of Santa Rita Jail demand:

1. Food- more variety of food options that include fresh fruits and vegetables.

2. Costs of Commissary- prices at commissary should match the federal rates. Aramark needs to lower their rate, or a new supplier should be found.

3. Cost of telephone calls and access- prices for phone calls are too high, access and availability to too low. We want our own personal electronics with access to email, text messaging, and internet so we can access Netflix and other accounts.

4. Clothing- 2 sets of Blues, 4 sets of shirts, socks, and underwear, 2 sets of workout clothes. With exchange availability twice a week.

6. Cell Cleaning- We want the option to clean our pods twice a week. We want clean mops with clean water; clean brushes and towels; more than 1 bottle of disinfectant solution per pod; better floor and shower cleaning supplies; pesticides that will kill bloodsucking gnats.

7. Mail- more reliable and on-time delivery especially for newspapers and an expedited
method of sending mail.

10. Family & Attorney visits
• Stop placing prisoners in lockdown within 6 hours of visit
• Notify prisoners they have upcoming video visits
• Allow video visits to begin in lockdown
• Technicians should be set up to monitor communications

13. Mandatory POD and Out of Cell Time – Reduce Lock down times. 10 hours a day for minimum
security prisoners!!

18. Inmate Intake Sanitation. All incoming inmates must shower and clean hands, fingernails and toe nails before receiving clothing and housing unit assignments. Jail needs to control bed bugs, lice, staph, and other infectious diseases. Stop arresting the homeless! And if they are arrested they must be clean before being placing in housing units.

19. Clean the holding tanks and dress out rooms (for women)! Hot mop, pressure wash, bleach, pick up the garbage and disinfecting agents once a day. Holding tanks are filthy and health hazards.

20. Clean the multi-purpose rooms and all prisoner holding cells, daily with hot mops and disinfectants.

22. Get Body Scanners. Stop the strip searches – they are ineffective, not yielding seizures, uncomfortable and dehumanizing. Adopt best practices.

24. Provide signage and intake paper relating mutual terms and conditions of respect, conduct and privileges between detainees and deputies.

26. Santa Rita needs to evolve its systems and methods away from this punitive justice system and demoralizing, inhumane treatment of citizens and drug addicts to a modernized system and methods of restorative justice! The current system does not make our communities any safer! To the contrary, it makes them less secure! We need to build people up, make them productive and restore their health and vitality. 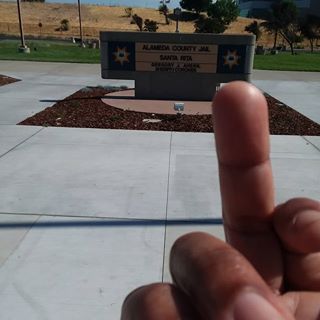